For 7 years from age 16 to age 22, I attended the Vans Warped Tour every summer. I remember finding out about Warped Tour when I was 15 from a friend in high school. It was at the time when I first discovered alternative music. Every year Warped Tour also releases a compilation album containing one song from every artist on that year’s tour. I became super interested in a few songs on the 2003 compilation that my friend had. That’s when she explained to me what the Vans Warped Tour was. I decided to purchase the 2003 compilation for myself and I was stoked to get the 2004 album upon its release (this was in the spring of 2004). More importantly I was extremely interested in going to Warped Tour that summer. Much to my dismay though, the tour wasn’t coming to my hometown. The closest venue that hosted the tour was 1 hour and 40 minutes away. At age 15, without a driver’s license and a car, it just wasn’t happening for me that summer. When the 2005 dates were announced a few months after the 2004 tour finished, I was pumped. The Vans Warped Tour was coming to my local concert venue and there was no way I was missing it.

Warped Tour began in 1995 as a skate punk/ska festival. It was founded by Kevin Lyman. In 1996, the skate shoe manufacturer and clothing brand, Vans, became the tour’s main sponsor. The Vans Warped Tour is the longest running touring festival in North America and the largest touring festival in the United States. In the late 90’s, the tour even went overseas to play dates in Australia, Japan, New Zealand, and Europe. It returned overseas to play a date in London in 2012 and again in 2015. Through the years, Warped Tour expanded on its music genres to include pop-punk, hardcore, emo, screamo, metalcore, and even some hip-hop and pop bands and artists. Many bands like Fall Out Boy, Blink-182, and Paramore, got their start on the Warped Tour. There’s even one notable pop artist who got her start on Warped Tour, but I’ll tell you more about it as you read on. It’s been said that Warped Tour is an initiation of sorts for bands because its a non-stop, all day touring event with many other bands that goes across the country over the entire summer. It’s intense to say the least, but from what I hear, tons of fun too. From the perspective of an attendee, it’s also fun for the festival-goers.

I attended my first Warped Tour in 2005.  I went with two friends and my mom because of course at age 16 I clearly wasn’t old enough to attend a music event with a chaperone (*sarcasm*). I also didn’t have my driver’s license by then so it worked out to have her as a ride. One thing different about Warped Tour compared to other music festivals is that you never know the lineup until the day of the festival. When you arrive you have to locate the giant board of set times and make a list of when and where your favorite bands are playing. It was always the craziest part of the day because everyone goes to that board upon entry. It gets so crowded on the way to there. At least I knew about the board in advance in 2005 despite being a Warped Tour rookie. That year I saw Fall Out Boy (only some of their set because Relient K overlapped), Relient K, The Offspring, and The Starting Line. I also planned to see Something Corporate, but they cancelled all their dates. It was the year their lead singer, Andrew McMahon (now of Andrew McMahon and the Wilderness and formerly of Jack’s Mannequin too), was diagnosed with cancer and was undergoing treatment. I still had the best time and knew from then on I would be making Warped Tour an annual event in my life.

I had some amazing times throughout 7 Warped Tours. I saw tons of my favorite bands play, sang my lungs out, skanked in skanking circles (ska music), considered crowd-surfing (although I never actually did), drank overpriced water and gatorade (hydration was always important), was involved in a torrential downpour, and even saw Katy Perry play. Yeah that’s right Katy Perry played Warped Tour in 2008! Told you I’d tell you more about that pop star who got her start on Warped Tour. Well, it was Katy Perry. It was while she had the “I Kissed a Girl” single out. My friends and I were resting and talking in the amphitheater a decent length away from the stage where a performance was happening and all of sudden I heard the “I Kissed a Girl” song. We realized we were relaxing during Katy Perry’s set. We watched the rest of the song, which happened to be her last one. Thinking back on it now, it’s kind of crazy to be able to say I saw Katy Perry play Warped Tour given the level of popularity she’s reached, but I did. It happened.

I could go on about Warped Tour. My memories of the festival are countless. I could tell you about the time I skipped The Bouncing Souls set for Four Year Strong and missed the first words to “Lean On Sheena” getting screamed in my friends’ faces (it was our song), or watching Hellogoodbye and all their friends parade around in costumes during their set, or skanking to my favorite Less Than Jake song in a giant skanking circle. One year a friend who I attended with asked me if I thought we would still attend Warped Tour as we got into our 20’s and 30’s like some of the older people we would see at the festival. My response was something along the lines of, “Hell yeah! Why wouldn’t we?” At the time, I never thought I’d stop liking Warped Tour style music or wanting to attend the festival. I guess I was wrong about that though.

I attended yearly through 2011. I almost went in 2012 as well but decided against it because I didn’t feel like getting rained on again in the festival like I did in 2008 (plus I would have been going alone). That ended my 7 year Warped Tour run and I haven’t been back since. The reason being is that I stopped listening to the type of bands that play Warped Tour. I grew and so did my music interests. The last year I attended I could tell it was already happening. There were less and less bands I was interested in seeing. My focus instead became attending festivals like Coachella, Lollapalooza, or Bonnaroo, ones that played the kind of music I was listening to. Warped Tour was my first festival though (“you never forget your first”). It was also my second, third, fourth, and so on. It prepped me for future festivals and gave me plenty of amazing music experiences a long the way. It also gave me many memories with friends who I attended with and met up with at the festival throughout my years of attending. It was the summer event to attend while I was in high school and college. For all those reasons, it will always hold a special place in my heart.

If you’re interested in attending Warped Tour this year or checking out some bands playing the festival, head to the Vans Warped Tour website. Since this isn’t one specific band that plays the Warped Tour and therefore I can’t leave you a list of songs to check out, here’s a few links to some of my favorite Warped Tour performances and some pictures I took during my years attending the event.

“Rooftops” by Mest, Warped Tour 2003 (Also one of my all-time favorite songs.) 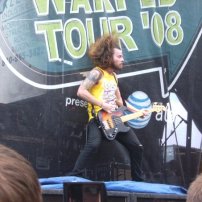 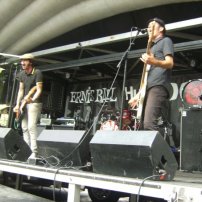 The giant board of set times! 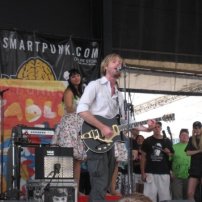 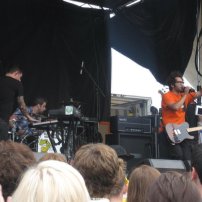